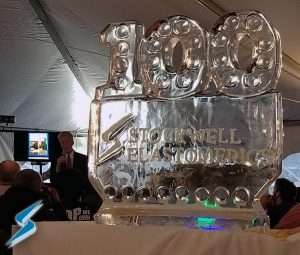 The highlight of the evening was Bill Stockwell’s talk about the company. He provided a detailed history starting with how his great grandfather started the company as the Stockwell Rubber Company in 1919 from his garage, and how his grandfather, great uncle, and father led the company until he became President in 1980. Bill also described some of current opportunities as Stockwell Elastomerics continues to grow and adapt.

Congratulations to Stockwell Elastomerics on its 100th year!