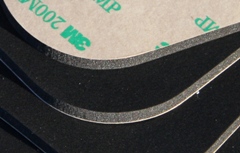 PORON® microcellular urethanes have been a major portion of Stockwell Elastomerics’ product line since Rogers Corporation developed this microcellular urethane foam for industrial and electronics applications in the 1980s. Stockwell Elastomerics inventories and fabricates PORON polyurethane in thicknesses from .012″ to .500″ thick and compressibility ranging from extra soft / slow rebound formulas to very firm formulas.

On the basis of total material laminated and fabricated in production, Stockwell Elastomerics fabricates more PORON into gaskets than any other material family.

PORON is a fine pitch open cell urethane foam produced by Rogers Corporation. The uniform, microcellular structure allows PORON to be easily compressed for dust seals and cushions. Water sealing with PORON is possible in applications with proper compression and moderate water exposure. The average cell size of PORON foam is approximately 100 microns. 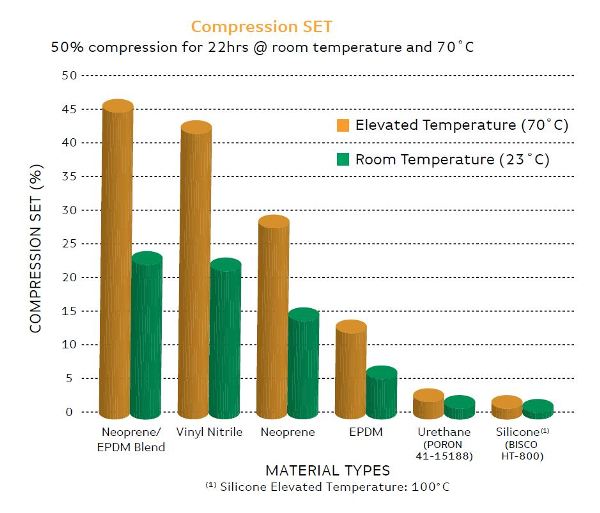 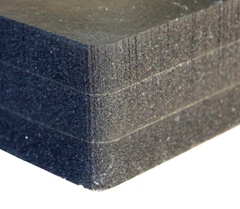 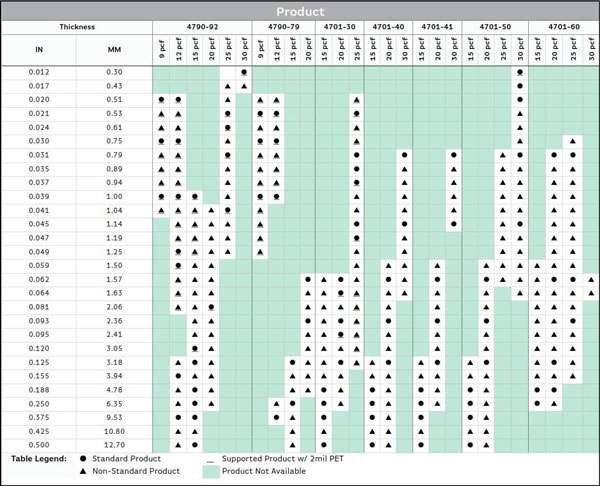 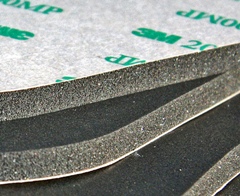 How Much to Compress PORON Foam? 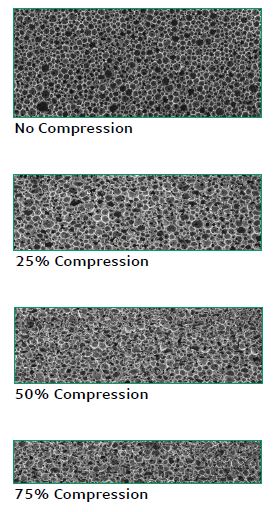 The answer to “how much to compress PORON foam” is – it depends. If PORON is being used for a dust seal, minimal compression is needed (assuming standard pressure). Usually for light water sealing such as splashing, 50 – 60% compression is a general range. While PORON is not typically Stockwell Elastomerics’ first choice for outdoor or heavy water exposure, it can be used when the compression range would be 60 – 70% to collapse the open cells (see images). Outdoor sealing is usually better served using a more UV and temperature stable material with a closed cell structure, so quite often Roger’s HT-800 silicone foam is specified.

The amount of pressure required to compress a PORON pad or PORON gasket can be estimated using compression force deflection curves such as the one below. The area (in2) is the area of the gasket or pad under compression. Click here for PORON compression curves.

For more information on these materials, view the PORON AquaPro product information sheet.

When Would PORON NOT Be Recommended?

Despite the microcellular structure which appears to be closed cell, PORON is an open cell foam. Outdoor enclosures that are subjected to rain and temperature extremes may not be sealed properly with PORON gaskets. Conditions where PORON may be flexed or repeatedly compressed and relaxed in standing water may cause water to be wicked into the gasket. Temperatures below -20°F will cause PORON to stiffen noticably, and PORON is not recommended for constant temperatures above 158°F. Outdoor conditions may be better served with silicone sponge or high grade neoprene or EPDM sponge materials.

Contact Us for further assistance with PORON microcellular urethane foam products. Stockwell Elastomerics is a Rogers Corporation Preferred Converter and one of the leading authorized PORON suppliers / PORON distributors in the USA.


PORON® is a registered trademark of Rogers Corporation.