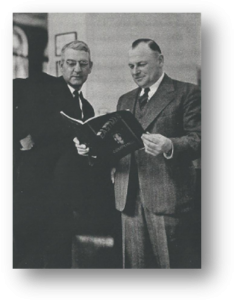 Stockwell Elastomerics, Inc. is a fourth generation, privately held business that was founded in 1919 by Frederick Elbridge Stockwell (shown in the photo on the left). Frederick was a salesman for the Boston Woven Hose and Rubber Company covering the Philadelphia territory. He decided to make a go of it with his own business – and we are grateful he took the risk.

The business began as Stockwell Rubber Company, Incorporated, a distributor of belting, hose, sheet rubber packing and wholesale rubber products – literally started from Frederick’s garage in Palmyra, New Jersey in August 1919. In 1920, Stockwell Rubber Company moved into an office and warehouse facility on 6th and Arch Streets in downtown Philadelphia.